Bk Sec Outline Sec Bk
Isaac: Earthly Pleasures vs. the Eyes of Faith
Genesis 25:11 – 27:46
Isaac. Less is written of Isaac than of Abraham, Jacob, or even Joseph. Yet there is much to learn from his life, and from his place in the purposes of God. As we trace the history of Isaac’s father Abraham, we find the principles of calling out (separation), promise, election, and justification by faith. Isaac was the promised son and heir. Abraham and Sarah had tried to fulfill the promise in the energy of the flesh, and the result was that Ishmael was born. Isaac was born according to promise, as Galatians 4 explains. As the promised son and heir, Isaac is a type of Christ in the latter chapters of Abraham’s life. Abraham is called to offer up Isaac at Mount Moriah, and he obeyed, “Accounting that God was able to raise him up, even from the dead; from whence also he received him in a figure” (Heb. 11:19). On the basis of the burnt-offering and Abraham’s obedience, the promises are confirmed with an oath to the promised Seed, which Galatians 3 shows is really Christ Himself. After the death of Sarah, which speaks of the suspension of God’s dealings with Israel, Abraham seeks a bride for His Son. Rebecca is a type of the assembly, the Bride of Christ. In Gen. 25:11 we come to the beginning of Isaac’s personal history. Isaac is the patriarch who was born in the land of Canaan. He is a type of a believer seated in heavenly places in Christ. The one great thing Isaac struggled with was his weakness for earthly things. He loved the savory venison that Esau made for him. This blinded Isaac to the purposes of God with regard to Jacob. It speaks of how earthly interests and pleasures can dim our spiritual eyesight, and take our focus off of Christ and our portion in the heavenly places.
O U T L I N E
Isaac’s Early Years: Family Struggles
Genesis 25:11-34

12 And these are the generations of Ishmael, Abraham’s son, whom Hagar the Egyptian, Sarah’s bondwoman, bore to Abraham. 13 And these are the names of the sons of Ishmael by their names according to their generations: Nebaioth, the firstborn of Ishmael; and Kedar, and Adbeel, and Mibsam, 14 and Mishma, and Dumah, and Massa, 15 Hadad and Tema, Jetur, Naphish and Kedmah. 16 These are the sons of Ishmael, and these are their names, in their hamlets and their encampments — twelve princes of their peoples. 17 And these are the years of the life of Ishmael: a hundred and thirty-seven years; and he expired and died, and was gathered to his peoples. 18 And they dwelt from Havilah to Shur, which is opposite to Egypt, as one goes towards Assyria. He settled before the face of all his brethren. vv.12-18 The Generations of Ishmael: His Death and Burial. This is one of ten generations mentioned in Genesis, all beginning with the words “the generations of”, etc. Read more… We have another in v.19. Ishmael is carefully distinguished as the son of Hagar the Egyptians, Sarah’s bondwoman. Ishmael had twelve sons who became princes, and they lived in “hamlets” or “encampments”. This means that each son was head of a nomadic tribe. They settled “from Havilah to Shur”, which covers what is modern day Saudi Arabia. Later on we will find that Esau married into the Ishmaelites (Gen. 28:9). It says “He settled before the face of all his brethren”, which seems to be a fulfillment of the prophecy in Gen. 16:12, spoken to Hagar. This could be translated “in the face of all his brethren”, which could indicate that the Ishmaelites would be an aggravation to others.[Kelly, William. Isaac.[/efn_note] No doubt “all his brethren” refers to Isaac and his descendants, as well as the sons born to Abraham and Keturah, such as Midian. Ishmael died at 137 years, but no mention is made of his burial, as with Abraham and Sarah. One thing we will realize, as we read next of the generations of Isaac, is how quickly and easily Ishmael reproduced and spread. For one thing, it was the fulfillment of the promises made to Hagar (Gen. 16:10) and Abraham (Gen. 17:20). But as a type of the flesh, Ishmael seems to have no difficulty having twelve sons, while Isaac, as a type of one walking in the Spirit, goes childless for twenty years before having two sons. So it is with the flesh; its wages are earned quickly. Meanwhile, he who walks in the Spirit waits on God’s timetable, trusting in Him to fulfill His promise. 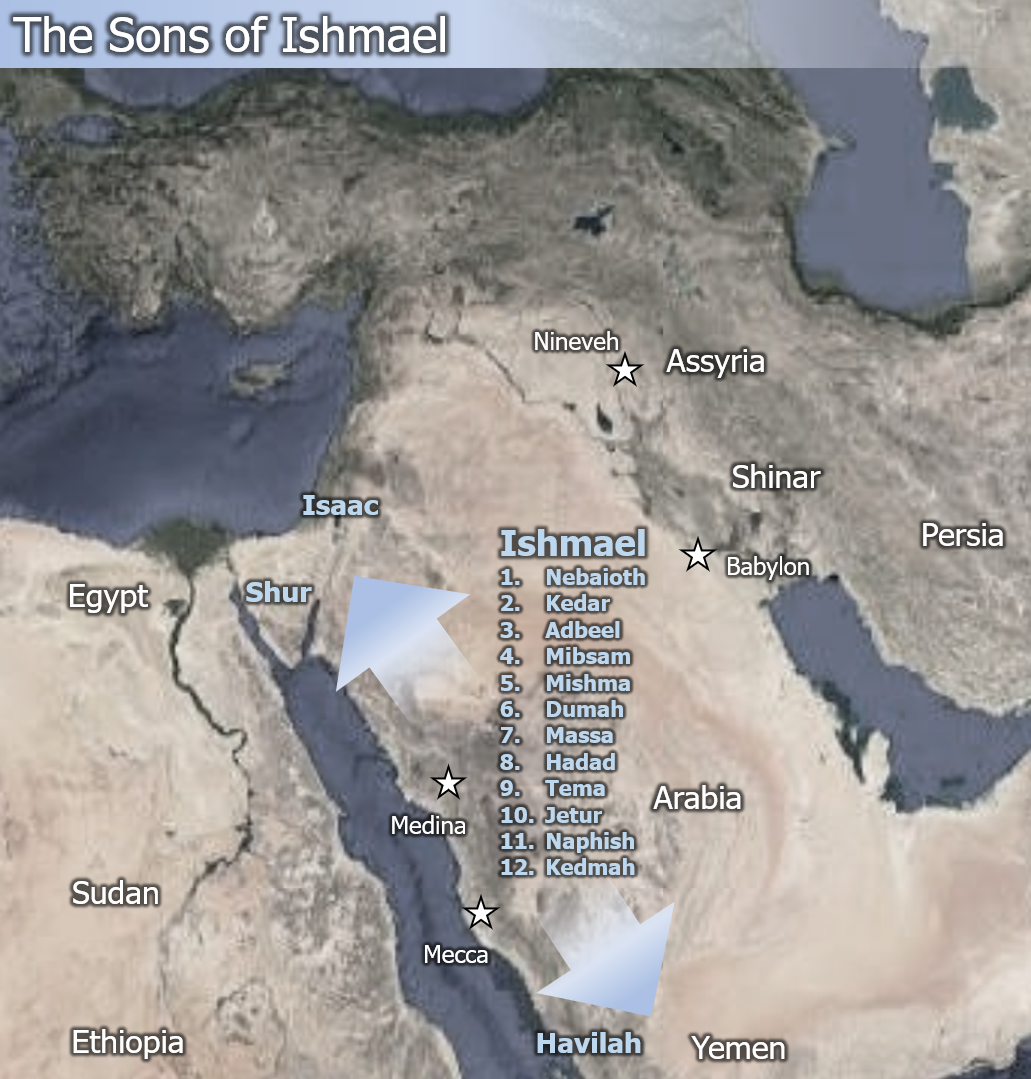 27 And the boys grew, and Esau became a man skilled in hunting, a man of the field; and Jacob was a homely man, dwelling in tents. v.27 Occupations. Just as the two boys were different in appearance, so they were different in their chosen occupations. Esau was an outdoorsman and a hunter, preferring the rugged lifestyle. Jacob was more civilized, and dwelled in tents. Who in prior history were known for these two occupations? Nimrod was a mighty hunter, and Abraham was a tent-dweller. Esau’s occupation fit his character as was later revealed. He loved excitement, and tended to act rashly. Jacob on the other hand was more cultured, though still fleshly. Yet he seemed to value the pilgrim lifestyle in some way, content to wait for “the city which hath foundations, whose builder and maker is God”.
28 And Isaac loved Esau, because venison was to his taste; and Rebecca loved Jacob. v.28 Favoritism. Next we find that family tendency which the chosen people struggled with for generations to come; i.e. favoritism. Parents should never have favorites with their children. This was a serious mistake, and it eventually resulted in the division of the family. Isaac loved Esau, and the reason given is not elevated; “because venison was to his taste”. This really shows a weakness on Isaac’s part. The lusts of the belly affected his heart. He was not able to get clear of this tendency until he was very old. Rebecca loved Jacob, but no specific reason is given. Perhaps she pitied Jacob as his father was showing favoritism to Esau. Perhaps she remembered the prophecy in connection with Jacob’s birth, and loved him for that reason. But perhaps Rebecca loved Jacob because he was so much like her. We will find in ch.27 that mother and son shared the same conniving determination. In any case, favoritism in families is never healthy.
29 And Jacob had cooked a dish; and Esau came from the field, and he was faint. 30 And Esau said to Jacob, Feed me, I pray thee, with the red — the red thing there, for I am faint. Therefore was his name called Edom [‘red’]. 31 And Jacob said, Sell me now thy birthright. 32 And Esau said, Behold, I am going to die, and of what use can the birthright be to me? 33 And Jacob said, Swear unto me now. And he swore unto him, and sold his birthright to Jacob. 34 And Jacob gave Esau bread and the dish of lentils; and he ate and drank, and rose up and went away. Thus Esau despised the birthright. vv.29-34 Esau Sells His Birthright. This account marks the character of Jacob and Esau. Jacob was at home cooking, and Esau was in the field, presumable hunting or working. Esau came in “faint” with hunger, and wanted to eat the dish Jacob had made. Knowing the character of Jacob, it is quite possible that he knew ahead of time that Esau would be hungry, and perhaps did this on purpose, although this is uncertain. Either way, it does not lessen the craftiness of what Jacob did next. Rather than simply share the dish with Esau, Jacob proposed a trade. Esau’s birthright, all of his privileges as the firstborn son of Isaac, Jacob wanted in trade for the dish, which was a simple meal of lentils, or beans. Jacob was unkind in this; there is no excusing it. But what Esau did was unthinkable. Speaking rashly, he says “I am going to die, and of what use can the birthright be to me?” How easily Esau traded away his birthright! Hebrews says that Esau, “for one meal sold his birthright” (Heb. 12:16). Jacob wanted to formalize what his brother hastily agreed to. “And he swore unto him, and sold his birthright to Jacob.” This shows the great difference between Jacob and Esau: one valued the birthright, and the other despised it. It is interesting that Esau was born red all over (v.25), but his family’s name Edom, which means ‘red’, is not given until this incident, when Esau called the dish “the red thing there”. Red is the color of the earth, and it speaks of nature. Adam also means ‘dust’ or ‘red’. Adam was made from the earth, Edom turned to the earth. Esau sold his greatest possession to satisfy the cravings of nature, and he proved his character before God.
The Birthright and the Blessing.

In Deut. 21:17 we read about the birthright, that that natural order in families was that the oldest son would receive "a double portion of all" that a man possessed. The birthright has to do with the immediate inheritance of the older son. The blessing is different. In Hebrews 11:20 it says "By faith Isaac blessed Jacob and Esau concerning things to come." The blessing therefore has to do with the future; i.e. extending to the descendants of the one who was blessed. Hebrews 12:16 speaks of how Esau sold his birthright. Hebrews 12:17 speaks of how he sought the blessing and was denied. Esau proved by his actions regarding the birthright that he didn't care for the portion that was promised to faith.

Esau as a Type of Israel. Esau is a type of the Jews who rejected Christ (their birthright) in order to curry favor with Romans. Like Esau, they were very shortsighted; willing to sell their Messiah for next to nothing (John 11:48). In this vein Esau is held out as a warning in Hebrews 12 to the Jews who had heard the gospel, not to sell their birthright.
Bk Sec Outline Sec Bk