Prev The Godhead Next
NAMES OF GOD
A third lecture in a seven part series on the Godhead.

Throughout the Bible we read of many names of God. In this article I would like to look at a number of these names, as they bring out deep and important truths.

The Personal Names of God

The Historical Names of God

The Dispensational Names of God

In His “eternal power and deity” (Rom. 1:20), God is always Elohim or Theos. However, in relationship, Jehovah reveals himself under various dispensational names:
“El Shaddai”, or God Almighty.

The name of Almighty God has the thought of special strength on behalf of those who are called by Him; i.e. power and provision for His people. It is a special name of character and relationship with those to whom God was revealed as such. God was revealed under the name "El Shaddai" first to Abraham, when he said "I (Jehovah) am El Shaddai; walk before me" (Gen. 17:1; Exodus 6:3). Again, He revealed Himself to Jacob (Gen. 35:11) as the Almighty God. The name is found forty-eight times in the Old Testament. The name El Shaddai is connected with the dispensational principle of calling.

“Jehovah”, or the Self-existing One. This name has the thought of the ever-existing One come forth in relationship to His people. “Jehovah” was often used by the patriarchs (occurs 195 times before the exodus), showing that God was always known personally to be the self-existing One, but in Exodus 6:3 we read: “I am Jehovah; and I appeared unto Abraham as El Shaddai: (in) my name Jehovah was I not (made) known to them.” This shows that God as Jehovah was not identified in a covenant relationship to a specific people until Moses. Israel was given to knew God as “Jehovah our Adoni (Lord)” (Psa. 8:1), and referred to Jehovah as “the name”. Hence, we read of the Israelitish woman’s son who “blasphemed THE NAME” (Lev. 24:11).  There are seven expansions of the name Jehovah in the Old Testament (read more…).
“Pater”, or Father. This name has the thought of special love for those who are His children. “Father” is the special Name under which God has revealed Himself to the Church (called out ones) in the New Testament (2 Cor. 6:18). The name is that of God the Father, distinct from the God the Son (sent to reveal the Father), and distinct from the God the Spirit (which causes us to cry, “Abba Father”; Rom. 8:15; Gal. 4:6). “The Father” is His eternal, trinitarian identity. He did not become the Father in time, but was revealed as such by the Son.
“El Elyon”, or the Most High God.

This name has the thought of the Possessor and Blesser of the universe. "Most High" is a name God takes in connection with men as the Supreme Governor of all things; setting Himself above all idolatrous gods, all demons and all earthly and angelic powers, as the "possessor of heaven and earth" (Gen. 14:19). The name "Most High God" is mentioned first in connection with Melchizedek, who is a type of Christ in His Millennial priesthood.3 God saw fit to force the greatest earthly monarch that has ever reigned (Nebuchadnezzar) to be "driven from the sons of men", to live like and animal... "till he knew that the most high God ruled in the kingdom of men, and that he appointeth over it whomsoever he will" (Dan. 5:21). Nebuchadnezzar was forced to honor God as Most High. God is "El Elyon" for all time, but this Name will be fully declared in the Millennium when the inheritance is taken by Christ. Today Satan is the prince and power of the air, roaming where he will. But one day Satan will be cast out of heaven (Rev. 12) and then banished from earth (Rev. 20). Once this is complete, God will be known as El Elyon, possessor of heaven and earth. It will be abundantly manifest that there is only one God. Israel was called to be a testimony to that great truth (Isa. 43:11-12), but they failed in that testimony and slipped into idolatry.4 The name is found fifty-one times in the Old Testament. The Greek word for Most High is "Hupsistos". 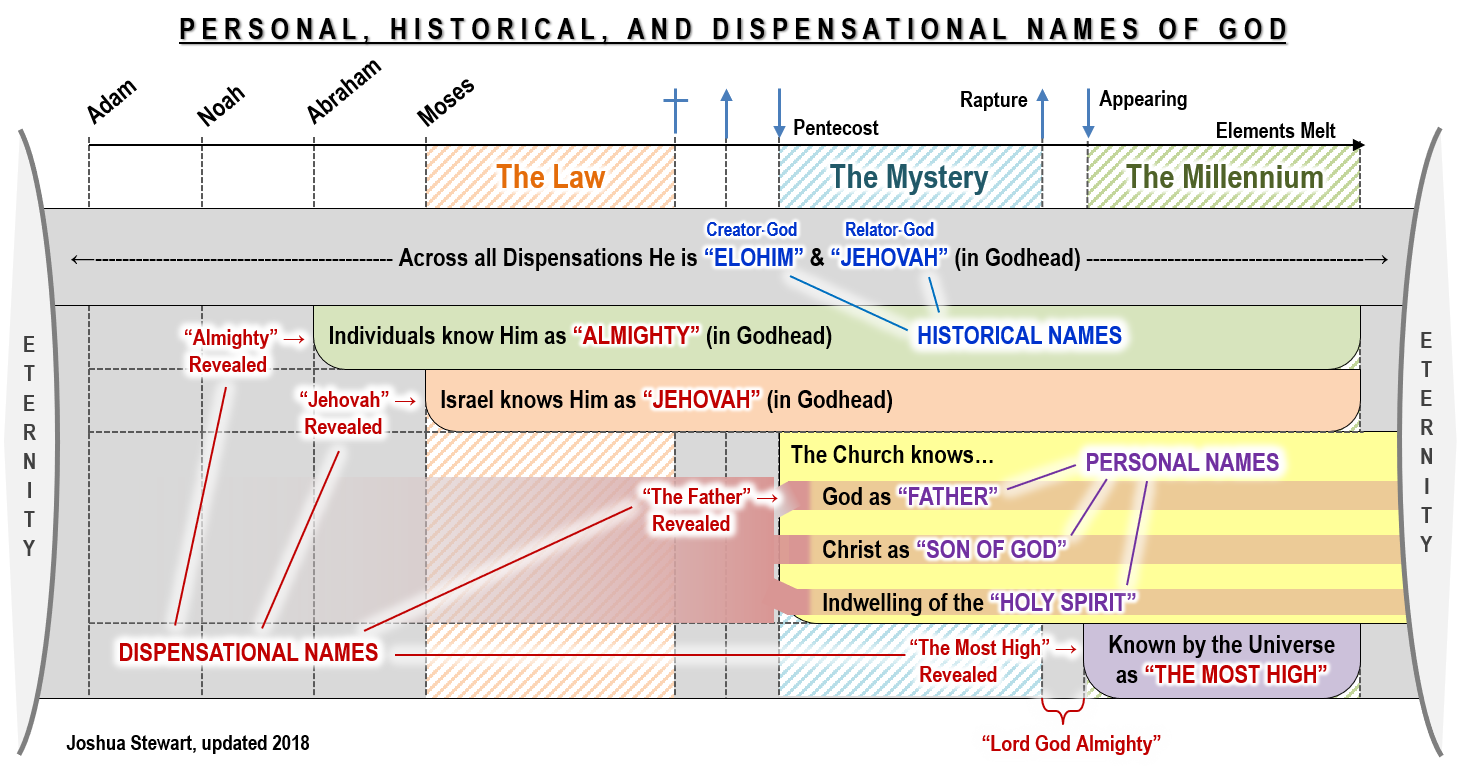 Prev The Godhead Next