THE
FEASTS OF JEHOVAH
An outline of God’s ways with Christians and with the Nation of Israel.

It has been well said that if a person has a solid grasp of the Seven Feasts in Lev. 23, the Seven Parables in Matt. 13, and the Seven Letters in Rev. 2-3 they will have a good overall grasp of the purposes and ways of God.

1. Feast of the Passover: Christ’s Death for Us

The Passover speaks of the death of Christ which shelters us from God’s judgment against sin. Christ suffered and died for the punishment that we deserved. He is the Passover Lamb.

1 Corinthians 5:7 “For even Christ our Passover is sacrificed for us.”

1 Peter 1:18-20 “Forasmuch as ye know that ye were not redeemed with corruptible things… but with the precious blood of Christ, as of a lamb without blemish and without spot: who verily was foreordained before the foundation of the world.”

The Passover was “the first feast”, because what it represent (the death of Christ) is the basis of all Christian blessing, and the foundation price for the accomplishment of God’s purpose.

A lamb was to be killed and its blood shed. The lamb was to be without spot, just as our Blessed Lord was without any imperfection. The blood, once applied to the doorposts, sheltered the people from the destroying angel. In a similar way, Christ’s blood shelters us from the wrath of God.

The Passover is to be part of the Christian’s diet (see article on spiritual food), and it also marked a pivotal time in the journey of Israel from Egypt to Canaan (see Lecture 1: Egypt and the Passover).

2. Feast of Unleavened Bread: The Holy, Separate Walk of Saints

The Feast of Unleavened Bread is connected with the Passover. It consisted of eating meal (or, bread) which is what sustains daily life. Leaven in scripture always speaks of evil, and so the fact that this bread was unleavened would suggest the thought of holiness. In this case, it represents the holy, separate life of the believer.

It requires a holy walk that is unpretended and honest before the Lord.

1 Corinthians 5:8 “Therefore let us keep the feast, not with old leaven, neither with the leaven of malice and wickedness; but with the unleavened bread of sincerity and truth.”

We cannot fulfill this type in our own strength. But we have been given the life of Christ, and the Holy Spirit to indwell us as the power of that life. This corresponds to practically enjoying deliverance from sin:

Romans 8:1-4 “There is then now no condemnation to those in Christ Jesus. For the law of the Spirit of life in Christ Jesus has set me free from the law of sin and of death. For what the law could not do, in that it was weak through the flesh, God, having sent his own Son, in likeness of flesh of sin, and for sin, has condemned sin in the flesh, in order that the righteous requirement of the law should be fulfilled in us, who do not walk according to flesh but according to Spirit.”

The practical result of walking in the Spirit is a separate, holy life. The seven days speak of spiritual completeness, because there was to be no leaven for seven days. There is no time in our life where we can allow the world and the flesh to be active. God desires total separation! It is the whole life of a believer, from start to finish; this is the significance of “seven days”.

3. Feast of First Fruits: Christ Risen and Accepted before God

The Feast of First-fruits was the day after the Sabbath (the third day) after Passover. It was the very day Christ rose from the dead! It fell on the first day of the week.

This feast speaks of the resurrection and glorification of Christ, and all its results. When Christ rose from the dead, He “spoiled principalities and powers, he made a show of them openly”. Not only that, but He rose as the head of a new creation, and as the first-fruits of a new race composed of those who are of the same “kind” as Himself!

1 Corinthians 15:20 “But now is Christ risen from the dead, and become the first fruits of them that slept.”

Revelation 3:14 “These things saith the Amen, the faithful and true witness, the beginning of the creation of God.”

John 12:24 “Except a corn of wheat fall into the ground and die, it abideth alone: but if it die, it bringeth forth much fruit.”

It is a meal offering (i.e. bread) so it speaks of life, similar to the unleavened bread. In this case, it is the resurrection life of Christ. Compare with Lev. 2 where it represents the life of Christ on earth before His death. Christ rose as Head of a sphere of life that is beyond death. On the resurrection day, the Lord breathed the breath of the new-creation-life into the gathered apostles. We too share in that life, which is characterized by the power of the Holy Spirit.

John 20:22 “And having said this, he breathed into them, and says to them, Receive the Holy Spirit”.

4. Feast of Weeks (Pentecost): The Assembly in its Testimonial Character

The Feast of Weeks was held fifty days following the Feast of First-fruits. In a similar way, fifty days after the resurrection of Christ, the disciples were assembled on the Day of Pentecost, and the Spirit of God was sent to indwell believers and form the Assembly, or Church.

Acts 2:1 “And when the day of Pentecost was fully come…”

Two loaves were to be waved before the Lord, and “two” speaks of adequate testimony. Some have thought that the two loads are Jews and Gentiles as two people-groups. However, we know from the New Testament teaching on the mystery that this subject of one body composed of Jews and Gentiles was hidden in ages past. The two loaves therefore represent the formation of a testimony on earth to the Name of our Lord Jesus Christ.

Matthew 18:20 “For where two or three are gathered together in my name, there am I in the midst of them.”

Again, it is a meal offering (i.e. bread) so it speaks of life; here, the resurrection life of the believer. The bread was leavened because as believers we still have the principle of sin within us. But it was not a leavened lump (see 1 Cor. 5:6; Gal. 5:9) because it says “baked with leaven”. The heat of the oven has stopped the action of sin, similar to how the power of the Holy Ghost delivers the believer from indwelling sin.

Romans 8:2 “For the law of the Spirit of life in Christ Jesus has set me free from the law of sin and of death.”

Rev. 5:9-10 “And they sing a new song, saying, Thou art worthy to take the book, and to open its seals; because thou hast been slain, and hast redeemed to God, by thy blood, out of every tribe, and tongue, and people, and nation, and made them to our God kings and priests; and they shall reign over the earth.”

The Feast of Trumpets represents the waking up of Israel to seek the Lord. The prophetic fulfillment will take place in the last 3 1/2 years of the Tribulation, when enlightened individuals among the faithful Jewish remnant will preach the gospel of the kingdom to the nation of Israel.

This work was begun by John the Baptist, but was cut short through Israel’s unbelief. The same ministry that John began will be taken up by faithful witnesses in the tribulation (Rev. 11:1-14).

A trumpet blast also announces a change of scenes. It will be a change of God’s earthly focus off from the Gentiles, and back to Israel (re-grafted). Eventually, this awakening will be extended to all Israel

Isaiah 27:13 “And it shall come to pass in that day, that the great trumpet shall be blown, and they shall come which were ready to perish in the land of Assyria, and the outcasts in the land of Egypt, and shall worship the LORD in the holy mount at Jerusalem.”

Ezekiel 37:10 “So I prophesied as he commanded me, and the breath came into them, and they lived, and stood up upon their feet, an exceeding great army. Then he said unto me, Son of man, these bones are the whole house of Israel.”

Matthew 24:31 “And he shall send his angels with a great sound of trumpet, and they shall gather together his elect from the four winds, from the one extremity of the heavens to the other extremity of them.”

6. Feast of Atonement: The Work of Christ Applied to Israel

The Feast of Atonement represents the deep work of national repentance that will be accomplished in the hearts of the faithful remnant of Jews before they are allowed to go into the Millennial kingdom.

They were to individually “afflict their souls” and “do no work”. If a soul did not afflict themselves, they were to be cut off from the people. This represents repentance for their national sins; first of all for idolatry, and mainly for the sin of crucifying their Messiah.

We get an example of this with Joseph. When the true Joseph presents Himself to the sons of Israel, they will afflict their souls as Joseph’s brethren did, while the house of Pharaoh listens in.

Israel will be forgiven for their sin and fully restored to the Lord. Israel will be brought under the propitiatory value of the work of Christ.

Isaiah 53:5 “But he was wounded for our transgressions, he was bruised for our iniquities; the chastisement of our peace was upon him, and with his stripes we are healed.”

Psalm 85:2 “Thou hast forgiven the iniquity of thy people, thou hast covered all their sin. Selah.”

7. Feast of Tabernacles: Israel’s National Glory in the Millennium

The Feast of Tabernacles typifies the rest that Israel will enjoy in the Millennium under the reign of the Messiah.

It speaks of rest and glory after judgment. It was celebrated after the harvest (grain) and the vintage (grapes). Each fall Israel would commemorate their wilderness journey before entering Canaan. In the Millennium, after the harvest and vintage judgments have taken place, and having been restored to their land, Israel will find rest in the glorious reign of Messiah.

Deuteronomy 16:13 “after that thou hast gathered in thy corn and thy wine.”

The nations will keep this feast representatively as well. They will acknowledge Israel’s supreme glory. Those who refuse will be punished.

Zechariah 14:16-17 “And it shall come to pass, that all that are left of all the nations which came against Jerusalem shall go up from year to year to worship the King, Jehovah of hosts, and to celebrate the feast of tabernacles. And it shall be, that whoso will not come up of all the families of the earth unto Jerusalem to worship the King, the LORD of hosts, even upon them shall be no rain.”

Israel will keep this feast with rejoicing, but with the memorial of wilderness through which God has brought them. For this reason they will build “booths” or “tabernacles” to temporarily live in.

Chronological Chart of the Seven Feasts 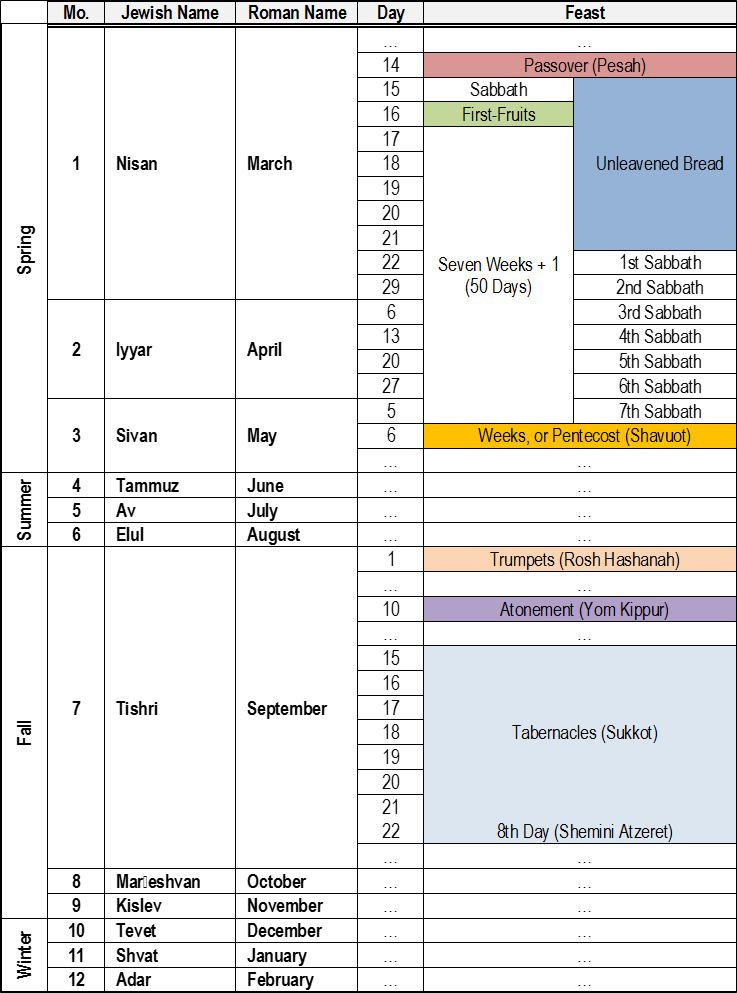