Prev Prophetic Events Next
THE PROPHETIC WEEK
The seventieth week of Daniel unfolded; also known as “the tribulation”.

Two sections of the Prophetic Week. There are two parts of the the prophetic week, and these are distinguished a number of places. In Daniel 9:27 we read of “the middle of the week”, marking a delineation at 3 1/2 years. Further, we read of numbers references to 3 1/2 years in Revelation (always referring to the second half), such as “a time, and times, and half a time” (Rev. 12:14; Daniel 12:7), “a thousand two hundred and threescore days” (Rev. 12:6), and “forty and two months” (Rev. 11:2; 13:5). These two half-weeks are distinguished from one another, and the events that bracket each are of great prophetic importance.

The Beginning of Sorrows: Seal Judgments

The Book of Revelation fills in the details of Daniel’s seventieth week in a very orderly way. Revelation is a book of judgment outlining the steps God will take to glorify His Son! Revelation is mainly focused on the effects that the coming judgments will have on the Revived Roman Empire (Christianized lands), while Old Testament prophecy focuses more on the effect of the coming judgments on Israel.
The Sealed Scroll. Revelation speaks of a book (or scroll) that is “written within and on the backside, sealed with seven seals” (Rev. 5:1). This book contains the counsels of God for the blessing of the earth that will be brought about through judgment.1 One of the themes of Rev. 4-5 is that the Lord alone is able and worthy to open the book and break its seals. Another important thing we see in Rev. 4-5 is a great change of administration when the Lamb takes the book. The saints in association with Christ will replace the angels as administrative executors – a change fully developed in the Millennium.
The seven seals. The first six seals are described in Revelation 6. Each seal unlocks a new portion of the book.
Indirect Judgments. These judgments are "providential" or "indirect". That is, God will be using natural things as instruments of judgment. Jesus described these first 3 1/2 years as follows:

"But ye will hear of wars and rumours of wars. See that ye be not disturbed; for all these things must take place, but it is not yet the end. For nation shall rise up against nation, and kingdom against kingdom; and there shall be famines and pestilences, and earthquakes in divers places. But all these are the beginning of throes." Matt. 24:6-8

Middle of the Week

Events that take place in the Middle of the Week. The middle of Daniel's seventieth week is an important milestone in prophecy. It is referred to as "the midst of the week" in Daniel 9:27.

"For then shall there be great tribulation, such as has not been from the beginning of the world until now, nor ever shall be" (Matt. 24:21, see also Rev. 7:14).

God’s Direct Judgments. The trumpets may be less extensive in their range than the seals (third part vs. fourth part of the earth), but they are more intensely judicial than the seals. Furthermore, they are directly from the hand of God, as we see the "angel", a type of Christ, refill the censer with fire from the brazen altar (the wrath of God against sin) and cast it on the prophetic earth (Rev. 8:5).
The Trumpet Judgments. The trumpet judgments open "under" the seventh seal. Really, the seventh seal is the entire last 3 1/2 years. The Trumpets are distributed throughout those 3 1/2 years. The first four trumpets are primarily to do with the apostatizing of the western nations, preparing them to receive Antichrist. Therefore, it seems the first four will happen in rapid succession at the middle of the week. The fifth trumpet corresponds to Antichrist coming forward, and the delusion of apostate Israel, once again at the middle of the week, but spanning a longer duration (“five months”). The sixth trumpet is at 1260 days, and the seventh trumpet is at the appearing, at the end of the week.
Correlation of trumpets and bowls. There is a high degree of correlation between the trumpets and bowls. The first of each series has to do with the earth, the second with the sea, the third with the rivers and fountains of water, and the fourth with the sun. The fifth trumpet is the delusion of apostate Jews, the fifth bowl is the delusion of the Beast’s empire. The sixth trumpet is a summary of the Assyrian’s influence on the beast’s empire, the sixth bowl gives the precise moment of the attack. The seventh in each series is the appearing of Christ. The seventh trumpet is a summary of the Day of the Lord. The seventh bowl is the specific event that will accompany his appearing, namely the destruction of Political Babylon (the Beast). Some have thought that the bowls are "under" the seventh trumpet just as the trumpets are "under" the seventh seal. However, the correlation between these bowls and trumpets would indicate that the bowls parallel the trumpets.
The Bowl Judgments. The bowl judgments are poured out on the prophetic earth, but the effects go beyond the Christianized part of the world to touch the outlying nations. Note the absence of the expression “the third part”. The bowl series is more universal. 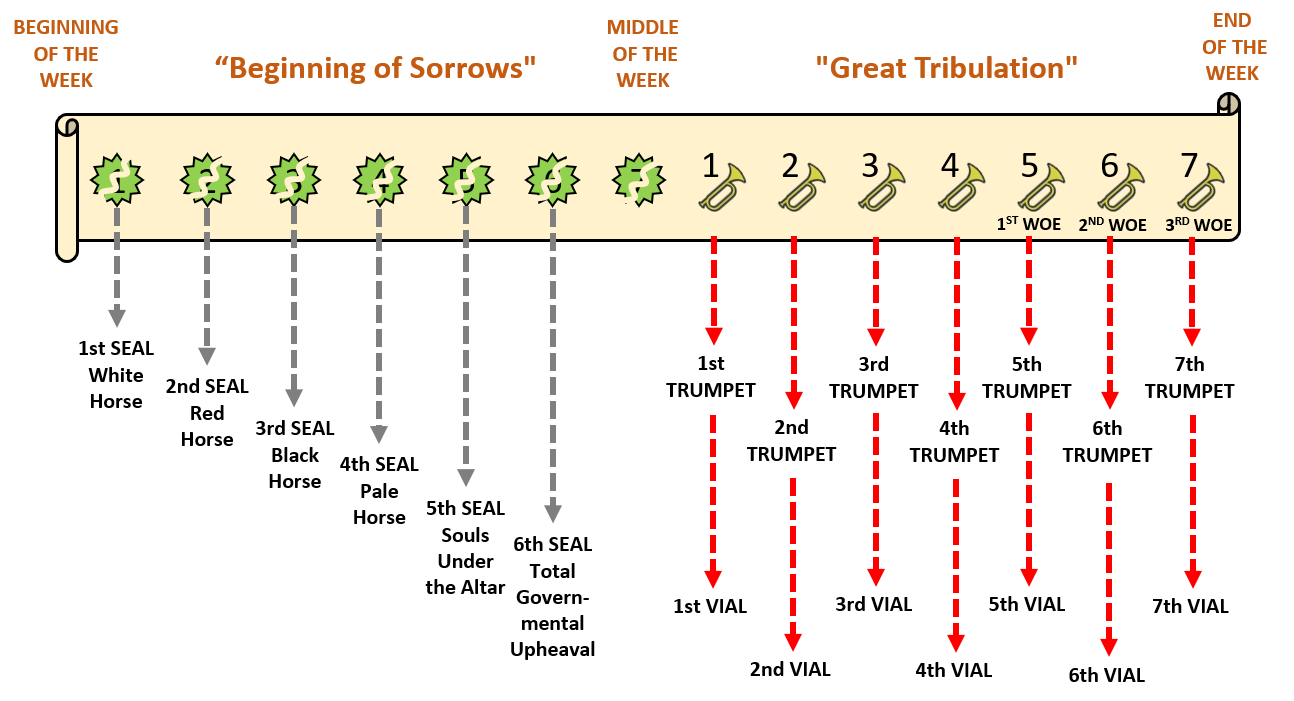 "And the dragon was angry with the woman, and went to make war with the remnant of her seed, who keep the commandments of God, and have the testimony of Jesus." (Revelation 12:17).