Bk Sec Outline Sec Bk
The Abrahamic Promises Confirmed
Genesis 15
Genesis 15. The previous three chapters form one section of the life of Abraham. They deal with the call of God, and its consequences; i.e. separation (ch.12), dependence (ch.13), and glory with Christ (ch.14). The next three chapters deal with the promises of God, and faith tested as to those promises. Ch.12-14 were largely public; i.e. Abram’s testimony before the Egyptians (Gen.12:17-20), before the Canaanites and Perizzites (Gen. 13:7), and before the king of Sodom (Gen. 14:22-24). Ch.15-17 are largely personal, in which God deals especially with Abram’s soul on a personal level. In the beginning of ch.15, Abram’s thoughts rise up to the purpose of God; to give him an heir. He is told that the heir would be his own son, and that his seed would be as the stars of heaven. God then repeats the promise of the land of Canaan to Abram’s seed, and Abram asks for a sign to confirm it. God showed Abram that he would die first, and his descendants would suffer in bondage in Egypt, before God would bring them up into Canaan. But though they would suffer, God would given them light for their pathway, leading them all the way home to the promised land. Then God gives Abram the full boundaries of the land promised to his seed.

CHAPTER 15
1 After these things the word of Jehovah came to Abram in a vision, saying, Fear not, Abram; I am thy shield, thy exceeding great reward. v.15 Abram’s Shield and Reward. The expression “After these things” marks this chapter as a new subject, although chronologically it follows the events of ch.14. This is also the first time in scripture that we have the expression “the word of Jehovah”, which later occurs 242 times in the Old Testament, always in connection with Divine revelation, and often as a test for faith; e.g. 1 Sam. 15:23; 1 Kings 20:35; Psa. 105:19; and frequently in the prophets, typically in the form of; “the word of the Lord came unto ____ saying,” or some similar expression. This will characterize the next few chapters of Abram’s history; i.e. faith tested by the Word of God. What are we going to do when the word of the Lord comes to us? Believe it like Abram, or reject it like Saul? Abram had just successfully refused the offer of the king of Sodom, who would have rewarded Abram with all the goods of Sodom. The Lord tells Abram not to fear, and that He would be his “shield”, for protection against the Canaanites or any of the Mesopotamian kings that might retaliate against him, and his “exceeding great reward” in lieu of the goods he had refused to take from the king of Sodom’s hands. Often the Lord will do this. He will confirm some truth to us after we have acted by faith! 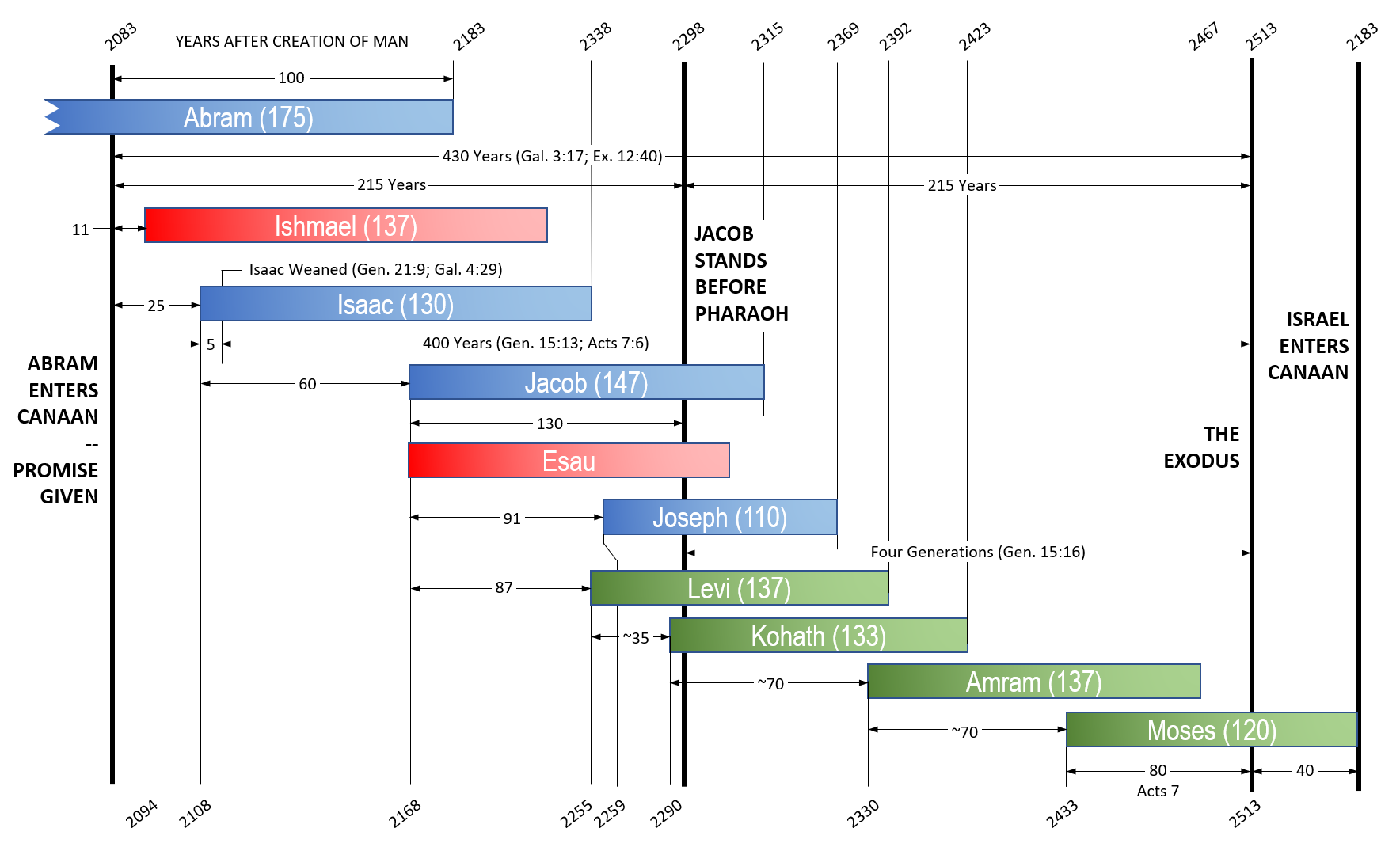 18 On the same day Jehovah made a covenant with Abram, saying, Unto thy seed I give this land, from the river of Egypt to the great river, the river Euphrates; 19 the Kenites, and the Kenizzites, and the Kadmonites, 20 and the Hittites, and the Perizzites, and the Rephaim, 21 and the Amorites, and the Canaanites, and the Girgashites, and the Jebusites. v.18 The Abrahamic Covenant. Jehovah then makes a covenant with Abram, which is more specific than any of the prior promises. It gives the exact boundaries of the land promised to his seed. (Note: the River of Egypt is not the Nile. Rather, it is a small river to the south of Israel.) In history, Israel only possessed a small part of this land. But in Isaiah 27:12 we learn that, in the Millennium, Israel will finally possess the boundaries promised to Abram in this verse!
Prophetic Application. In addition to the immediate fulfillment of Abram’s vision of the children of Israel in Egypt, there is a future prophetic application as well. Abram, between the pieces of animal, represents the faithful remnant of the Jews, occupying the land of Palestine during a time of great tribulation. The birds of prey represent the Gentile nations that will descend on Israel, attempting to destroy or conquer that land. The smoking furnace pictures the intense persecution that the faithful Jews will face at that time, and the burning lamp represents the light of prophecy that will guide them though that dark time. At the end of the great tribulation, the remnant will inherit the full possession promised to Abram, from the river of Egypt, to the river Euphrates.
Bk Sec Outline Sec Bk
Tagged with: Abrahamic Covenant Bible Chronology Justification Sacrifice The Prophetic Land