Bk Sec Outline Sec Bk
The Tower of Babel
Genesis 11
Genesis 11. The previous chapter is a parenthesis between chapters 9 and 11. In chapter 9 we saw the commandment of God was to swarm and cover the earth. In ch.11 we find man’s rebellion at work to congregate in the plain of Shinar, and the governmental judgment on man, resulting in their scattering. Genesis 10 gives us the divisions of nations, and Genesis 11 the moral cause of the division. No specific individuals are mentioned in vv.1-9, because the subject in this portion is what mankind endeavored to do as a universal republic, and what the Lord did in response. 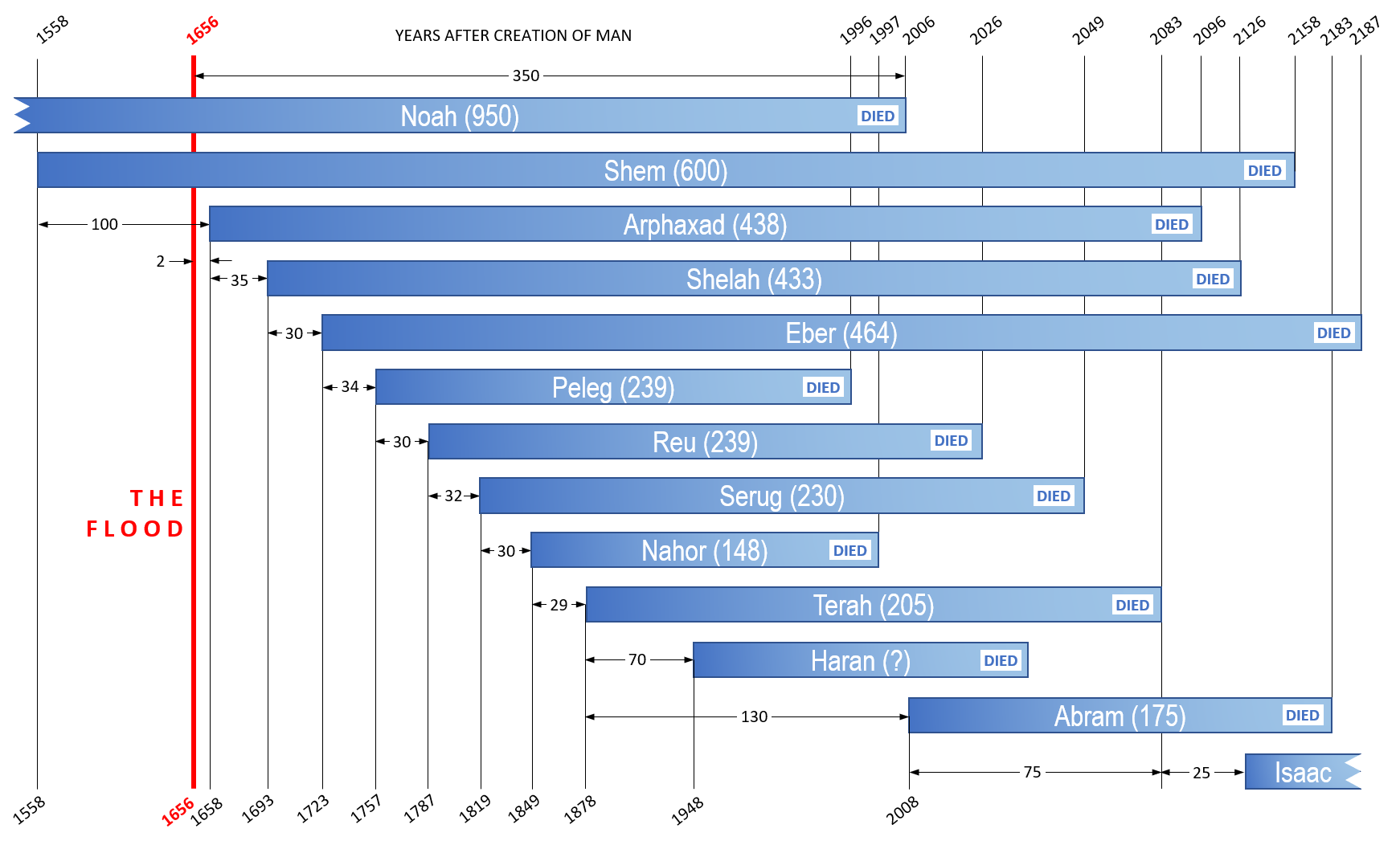 27 And these are the generations of Terah: Terah begot Abram, Nahor, and Haran; and Haran begot Lot [‘a wrapping’]. 28 And Haran died before the face of his father Terah in the land of his nativity at Ur of the Chaldeans. 29 And Abram and Nahor took wives: the name of Abram’s wife was Sarai [‘a princess’]; and the name of Nahor’s wife, Milcah [‘a queen’], a daughter of Haran, the father of Milcah and the father of Iscah [‘a covering’]. 30 And Sarai was barren: she had no child. vv.27-30 It would also seem that Haran was the eldest son of Terah, born when he was 70 (v.26), which explains how he could die before his father in the land of his nativity, and how his daughter Milcah could marry his brother Nahor. We find out in Gen. 20:12 that Sarai was also a daughter of Terah, but through a different wife than Abram’s mother; “And yet indeed she is my sister; she is the daughter of my father, but not the daughter of my mother; and she became my wife.” Jewish tradition holds that Sarai is the same person as Iscah, making her the granddaughter of Terah. It could be that Haran was born to Terah and his first wife, and that Abram and Nahor were born to the second wife. Nahor took his niece Milcah to wife, and Abram his half-sister or half-niece. The theory of a half-niece seems more probable because Sarai was ten years younger than Abram. Why would it speak of Sarah as Abram’s sister if she was his niece? It is in the same way that Lot is spoken of as Abram’s brother (Gen. 14:16), though he was really his nephew (Gen. 11:31; Gen. 12:5). It doesn’t really matter, only that Sarah was a descendant of Terah, like Abraham, only through a different mother. If she was directly the daughter of Terah, it would have been through a younger wife than the mother of Abram. Haran died “before the face of his father Terah in the land of his nativity”. We are not told how or why he died, although it does seem unnatural.
31 And Terah took Abram his son, and Lot the son of Haran his son’s son, and Sarai his daughter-in-law, his son Abram’s wife; and they went forth together out of Ur of the Chaldeans, to go into the land of Canaan, and came as far as Haran, and dwelt there. 32 And the days of Terah were two hundred and five years; and Terah died in Haran. vv.31-32 The call of Abraham took place before v.31, but it is left out here, and recorded in ch.12. Acts 7:2-3 makes it clear that “The God of glory appeared unto our father Abraham, when he was in Mesopotamia, before he dwelt in Charran, and said unto him, Get thee out… etc.” Apparently, Abram’s father went with him, and this became a hindrance to Abram. They “came as far as Haran, and dwelt there”. Haran or Charran was a city on the Euphrates river in Syria (Aram). It was half-way on the path to Canaan. They remained in Haran until Terah died, and only then did Abram continue to the land of Canaan. It is a lesson for us, that we need to be careful not to let family ties hinder us from responding to the call of God. While Abram tried to answer both the call of nature and the call of God, progress stalled. He obeyed only in part. Terah seemed to take the lead (he “took” Abram his son), which meant that Abram was not really answering the call of God. Terah may have tried to apply the call to himself, but it was for Abram. The call of God (Gen. 12:1-3) involved leaving his kindred and his father’s house. This he did not do, until Terah died. Abram’s brother Nahor did not leave Ur of the Chaldees until much later, and he settled in Haran for good. The name of the province became known as Padan-Aram (Haran of Syria). This became the home of Bethuel, Laban, Rebecca, Leah, and Rachel. But Abram’s brother Haran had died in Ur, and apparently Abram took Haran’s son Lot under his wing, so to speak, although Lot may have been the same age as Abram due to the sixty-year difference between Haran and Abram. Terah dies, and Abram is free to move again.

Joshua 24. It is striking that this special family ended up steeped in idolatry like the nations around them. It isn’t because Terah’s family was faithful that Abraham was chosen, but rather it was God’s sovereign grace. “Thus saith the LORD God of Israel, Your fathers dwelt on the other side of the flood in old time, even Terah, the father of Abraham, and the father of Nachor: and they served other gods” (Josh. 24:2). The danger that was set before the children of Israel was that they might go back to what Abram was called out of. They children of Israel were to remember Abraham’s history; “And thou shalt speak and say before Jehovah thy God, A perishing Aramean was my father, etc.” (Deut. 26:5). As to who brought in the idolatry, scripture is silent. Terah was involved in it. Secular history credits Nimrod with the introduction of it , but scripture simply says man’s unthankfulness to God (Rom. 1) and Satanic power (1 Cor. 10) are responsible for bringing in the great plague of idolatry.
Bk Sec Outline Sec Bk
Tagged with: Bible Chronology Human Glory Language Tower of Babel