Legality or Legalism. This term refers to the error of putting oneself or others under a legal standard as a rule for justification or practical holiness before God or man. It makes that which is external the basis of acceptance.  Legality can take many different forms, but they all have a few things in common. Legality involves putting man under a legal standard of some kind. It makes man the focus rather than Christ, and it produces spiritual bondage and death. The New Testament epistles refute many errors, but none more extensively than the error of legality.
Various Types of Legality. The error of legality or legalism manifests itself in various ways. Some are more serious than others, and they often occur together.
Legality vs. Worldliness? On the surface legality and worldliness appear completely opposite. But it is important to understand that legality is really part of the principles of the world. 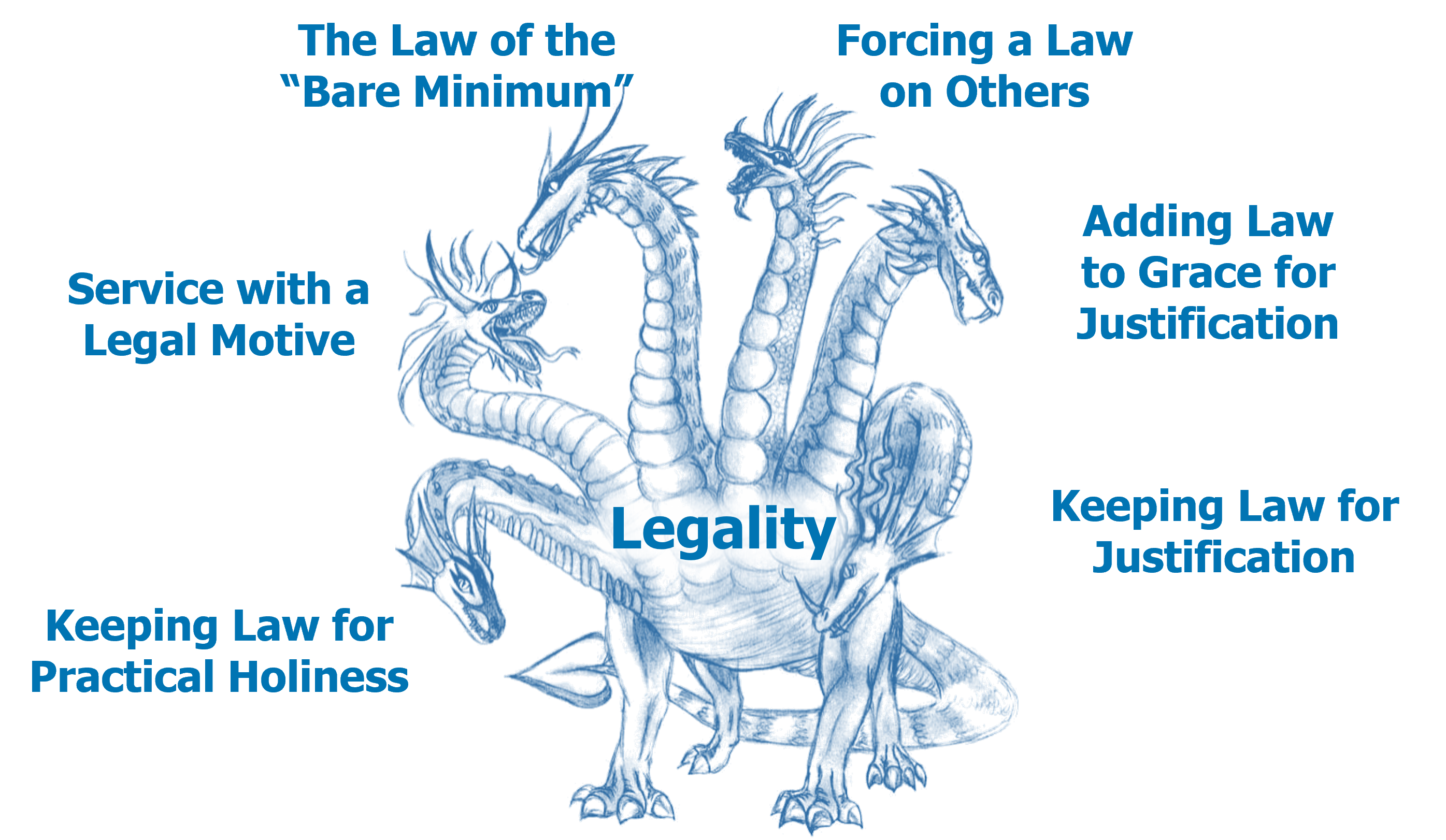 Legality vs. Grace. In the New Testament the principles of legality and grace are contrasted, especially in the epistles to the Romans and the Galatians. Numerous contrasts are made:
What does legality look like? We all have a tendency to be legal because legality and the flesh are suited to one another, and our hearts are very deceiving. In Col. 2:21-23 Paul gives a number of things that mark a system of ordinances that constitute legality: a list of rules governing the outward behavior, a focus on temporal and earthly things, authority derived from the word of man such as “traditions” that set aside God’s Word, an appearance of super-godliness, and a system that is satisfying to the flesh.
Convictions, or Exercises. A conviction, for the purpose of this article, is the belief that a specific behavior or action is right or wrong for oneself, even if there isn’t a specific command about it in scripture. It involves the conscience being bound to take a certain course of action.
Biblical convictions are a very normal part of Christian life. Having convictions means that the principles of the Word apply in our lives practically. An example of a conviction would be the following: scripture says that women should dress modestly (1 Tim. 2:9), and therefore a sister is convicted that she should not wear certain clothing in public (fill in the blank). This is totally normal and healthy. However, an obsession with our convictions, especially about superficial things, is not healthy (Heb. 13:9). Sometimes carnal or worldly Christians will label those with Biblical convictions as “legal”, and this is a serious misjudgment. On the other hand, we need to be careful not to judge another who doesn’t share our convictions (Rom. 14:3).
When it comes to teaching others, it can be helpful to share our convictions as an example, but we must guard against teaching our convictions as if they were the Word of God. To do so would be to fall into legality. We are to teach the Word of God, not the word of man. We must “learn … the lesson of not letting your thoughts go above what is written” (1 Cor. 4:6, DBY trans.). There is everything right and nothing wrong with convictions, unless we (1) make them a rule for acceptance before God, (2) make them a standard for godliness, or (3) legislate them upon others.
Common Misconceptions about Legality. There are many false ideas about legality:
Purging the Leaven of Legality. When we consider what the Word of God has to say about legality, we find that it is condemned in all its forms. Some forms of legality are more obvious, others are more insidious. Legality must be gotten rid of, or else it will spread and grow, leading to all sorts of harm; “A little leaven leavens the whole lump” (Gal. 5:9). We must see that the Christian’s responsibility is to follow the instructions given allegorically in Galatians 4:21-31, to “cast out the bondwoman and her son”. The bondwoman (Hagar) represents the law, and her son (Ishmael) represents the flesh that desires to be under the law. In order to be free of legality we need to do both. We need to reject the legal principle (Gal. 5:1), but we also need to crucify the flesh with the affections and lusts (Gal. 5:24). The Galatians had fallen into both: they had a legal system of rules, and yet the flesh was at liberty. But there are two other dangers as well; we are to “cast out the bondwoman and her son”. If we keep a legal standard while trying to suppress the flesh (cast out the son, but not the bondwoman) we have gained nothing. If we reject the list of rules but relish the lusts of the flesh (cast out the bondwoman, but not the son) we have gained nothing. The only path for us is to live as “children of the free woman”. We are called to “stand fast in liberty” (Gal. 5:1) and to “walk in the Spirit” (Gal. 5:16). It is grace that saves us, and it is grace that keeps us walking in holiness before the Father’s face!
The Cure for Legality. The cure for legality in each of its forms is Christ Himself. We can only be used by God to deliver souls from legality by presenting Christ to them: to address the divine life within them, and to feed the new nature the food it thrives on. To break this down a little further, we might consider that “the law was given by Moses, but grace and truth came by Jesus Christ” (John 1:17). A person under legal bondage needs to be presented with grace: the undeserved favor that the believer receives through Christ, and stands in before God, which is both unmerited by the recipient and undiminished by time or circumstances. Second, a person needs to be presented with truth: the true relation of all things as they really are with God. The truth is only fully known “in Jesus” (Eph. 4:20-21); all that God is in love and light is manifested to us in the Word become flesh (John 1:18; 2 Cor. 4:6). We need to be established and maintained in both! We cannot continue in truth if we give up grace, nor can we continue in grace if we let go of truth.
Amazing Grace, how sweet the sound
That saved a wretch like me
I once was lost, but now am found
Was blind but now I see.
Through many dangers, toils and snares
We have already come
T’was Grace that brought us safe thus far
And Grace will lead us home.1
Tagged with: Grace Law Legalism Legality Obedience