I am thinking of making commentary private for a several reasons. Please let me know if you use the commentary and would miss it.
Bk Sec Outline Sec Bk
Class #2: The Educated Gentile
Romans 2:1-16
Romans 2. The class addressed in this section is personified by a man who is judging a man in the previous class. However, he is sadly lacking in his understanding of God’s ways in judgment. He is deceived into thinking that superior knowledge absolves him from guilt. Actually, the opposite is true. Paul explains to this man the true nature of God’s judgment. This second class is not differentiated from the first class by the seriousness of the deeds they do, but by the light they are privileged to have.
A thesis on the judgment of God. When someone is either careless of their own conduct, or very judgmental of others (the case of the educated Gentile), it is because they themselves don’t understand the judgment of God. Paul gives six truths about the judgement of God in vv.2-16.
Education can’t save you. This chapter shows us that education and culture do not preserve a person from the indulgence of the flesh. Recognition of evil does not give a person power to live a righteous life, but it does make you more responsible.
Judging others. A large part of the Gentile world is quite civilized and educated, and tries to appear morally upright. This civilized class of people looks with disgust upon the lewdness of the ignorant pagan world and they try to distance themselves from it, by “judging” the others, if not in their words, then in their policies. However, this shows that they know the difference between right and wrong, and so their conscience is functioning. Therefore, this class is actually guiltier than the heathen because they have the witness “their conscience” (v.15) in addition to creation.
Western immorality. we often think of the homo-sexual community in America in the context of Rom. 1, because that is where such behavior is mentioned. However, really they are not barbarians, but educated civilized people, and qualify for a higher degree of responsibility, as in Rom. 2:1-16. They are immoral persons who conduct themselves outwardly in society in a professedly upright way.

General Description of this Class of Men (2:1)

CHAPTER 2
¶ Therefore thou art inexcusable, O man, every one who judgest, for in that in which thou judgest another, thou condemnest thyself; for thou that judgest doest the same things. v.1 The educated Gentile is inexcusably under the judgement of God for two reasons (not separate reasons, but one compounds the other):

God’s Judgment is a Consequence of Man’s Sin (2:2)

2 But we know that the judgment of God is according to truth upon those who do such things. v.2 The expression “we know” is one of common knowledge or confidence in an established fact; it is definitely going to happen. God’s judgement is “according to truth”; it is not by man’s standards, which continue to decline morally, but God’s, which are as stable as His throne. God’s perception is reality. The judgment will fall on them “which commit such things”; because actions have consequences (see Eph. 5:5-6).

God’s Judgment is Inescapable for All (2:3)

3 And thinkest thou this, O man, who judgest those that do such things, and practisest them thyself, that *thou* shalt escape the judgment of God? v.3 The judgment of God is inescapable for all (Psa 89:14). Looking down on and judging others for their sins might make a person feel superior, but does not absolve them from guilt.

God’s Judgment is Often Delayed to Allow Space for Repentance (2:4)

4 or despisest thou the riches of his goodness, and forbearance, and long-suffering, not knowing that the goodness of God leads thee to repentance? v.4 The mercy of God in delaying His judgment (2 Pet. 3:9) only further incriminates man (Ecc. 8:11). Notice that often a denial of God’s judgment is coupled with a denial of His love. This “repentance” is not just an intellectual thing; the conscience must be engaged. The results of true repentance will be evident (Matt. 3:8) by fruits in the life. We can see that God has been good to the nations (Acts 14:15-17).

God’s Judgment is Proportional to a Man’s Cumulative Guilt (2:5-6)

5 but, according to thy hardness and impenitent heart, treasurest up to thyself wrath, in the day of wrath and revelation of the righteous judgment of God, v.5 The expression “treasurest up” gives us the illustration of one putting money in the bank; accumulating guilt. Every time you reject the grace of God, the “pile” of wrath coming to you grows higher. The word “impenitent” means unthinking or unfeeling; recall that “pent” is Latin for “think”. The term “the day of wrath” refers to the day of the second resurrection when the books are opened, etc. (Rev. 20:12).
6 who shall render to each according to his works: v.6 This is a principle that runs throughout scripture, see Luke 12:47-48, Rev. 20:12, Prov. 24:12, Psa. 62:12, and Rom. 6:23. Does God make a difference, or discriminate when He judges men? In Rom. 3:22 it says “for there is no difference” but that is in regard to “all have sinned”. When it is a issue of how “bad” a person has been in their life, then “each” is different (v.6).

vv.7-10 are describing two lifestyles that may be lived, and the results of each. These two lifestyles apply to everyone, but remember that Paul has not brought in the gospel yet.
7 to them who, in patient continuance of good works, seek for glory and honour and incorruptibility, life eternal. v.7 He is not defining how a person gets eternal life (that is through faith), but the lifestyle that ends there (see Acts 10:35).
8 But to those that are contentious, and are disobedient to the truth, but obey unrighteousness, there shall be wrath and indignation, v.8 “The truth” is whatever truth that the person has, not necessarily the gospel of the grace of God. In many cases is it the truth about God seen in creation (ch.1), and witnessed by a person’s conscience (ch.2).
9 tribulation and distress, on every soul of man that works evil, both of Jew first, and of Greek; 10 but glory and honour and peace to every one that works good, both to Jew first and to Greek: vv.9-10 Notice that when judgment is finally mentioned it is upon every “soul” not body. This is because anguish begins with death, long before the lake of fire (Luke 16:23). In v.9b and v.10b it says “to the Jew first” because the Jew was the first to receive the higher revelation from God, in both Old and New Testaments.
11 for there is no acceptance of persons with God. v.11 Here we have a plain statement that God is an impartial judge and will not be influenced, swayed, or bribed the way worldly judges often are:

12 For as many as have sinned without law shall perish also without law; and as many as have sinned under law shall be judged by law, v.12 We will be judged according to the highest moral standard we have known (Luke 12:47-48). Lest someone try to abuse this principle to excuse those without the law, Paul shows in the next three verses that the Gentiles are not excused.
vv.13-15 Here we learn that that man has a law (conscience), even without the law (mentioned 4x). This proves that God has plenty of ground to judge a person found without faith in the day of Judgment even if they don’t have the written law.
13 (for not the hearers of the [Mosaic] law are just before God, but the doers of the [Mosaic] law shall be justified. v.13 This verse is not saying justification is by works (Rom. 3:20). “Doing” the law could justify a person in this sense: if you had never sinned you could have the prospect of being justified. However, the law could never put you “in Christ”. But once we have sinned the law can never bring us up to an innocent condition. What this verse is really saying is that God looks at deeds, not merely ideas. It’s one thing to entertain God’s standard in our thoughts, it is another thing to live it out in our lives.
14 For when those of the nations, which have no law, practise by nature the things of the [Mosaic] law, these, having no law, are a law to themselves; 15 who shew the work of the [Mosaic] law written in their hearts, their conscience also bearing witness, and their thoughts accusing or else excusing themselves between themselves;) vv.14-15 These verses show that God has impressed the basic elements of the law on mankind (Roman law, Hammurabi’s code, etc.). This is what C.S. Lewis called “the law of nature”. The Jew profited because he had it all written down. The word “law” is found three times in this verse and it refers to a moral principle. When it is “the law” it specifically refers to the Mosaic law. It is not that the Law of Moses is written in the hearts of all men, but that “the work (or, moral import) of the law” is there because their consciences have given them the knowledge of good & evil. “Accusing” and “excusing” (see v.1) are two things humans do only because they have a conscience (“con” with “science” knowledge). The fact that man is capable of judging makes him responsible! 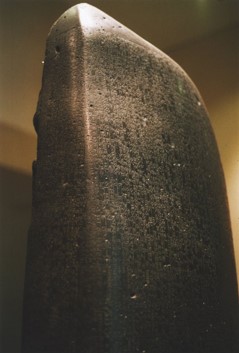 Moral Standards and the Existence of God. The existence of moral sensibilities in human civilizations around the world proves the existence of God. There are numerous examples of ancient legal codes from civilizations that had no contact with the law of Moses: the Code of Ur-Nammu, king of Ur (Chaldea – 2050 B.C.), the Code of Hammurabi (Mesopotamia – 1754 B.C.), and the Twelve Tables of Roman Law (Rome – 451 B.C.). As Paul says in Romans 2:15, these civilizations “have no law” from God, but they “practise by nature” some of the very same “things of the [Mosaic] law”. Why? Because the “work of the law” is “written in their hearts”, and this is evident by the functioning of their consciences. If objective morals exist, there must be an objective moral standard. What makes something good or evil? It it a societal construct? Are morals a biological result of evolution? No. There are certain moral values and duties that span across cultures and ages. Objective morals do exist. Therefore, an objective moral standard exists. God is the best explanation for an objective moral standard! For this reason, Paul declares that conscience makes man responsible to believe and obey God.
16 in the day when God shall judge the secrets of men, according to my glad tidings, by Jesus Christ. v.16 The Lord Jesus is the Judge (John 5:22). Secrets will be judged as well as public things. “The day” refers to the judgment at the great white throne (Rev. 20:11-15). This will be a Judge that has perfect knowledge of what men have done, and also how much light they have had.
Bk Sec Outline Sec Bk
Tagged with: God's Judgment