Main article: Battles of the Indignation
Related: Vintage Judgment; Judgment of the Quick and the Dead

The Harvest Judgment (Rev. 14:14-16; Isaiah 21 – 24). At the time of the appearing, the angels will go forth over the Beast's empire and “reap” those who have refused the gospel of the kingdom. This is called the harvest judgment. The Harvest Judgment is a discriminating judgment, pictured in Matt. 13 by the harvestmen removing the tares from the field.

"The Son of man shall send his angels, and they shall gather out of his kingdom all offences, and those that practise lawlessness, and they shall cast them into the furnace of fire; there shall be the weeping and the gnashing of teeth." (Matt. 13:14)

"And I looked, and behold a white cloud, and upon the cloud one sat like unto the Son of man, having on his head a golden crown, and in his hand a sharp sickle. And another angel came out of the temple, crying with a loud voice to him that sat on the cloud, Thrust in thy sickle, and reap: for the time is come for thee to reap; for the harvest of the earth is ripe. And he that sat on the cloud thrust in his sickle on the earth; and the earth was reaped." Rev. 14:14-16

The Lord will send out His angels into “the whole world” to cleanse “the kingdom of the Son of man”, which is the prophetic earth (Matt. 13:37-42). It is discriminating because only the impostors (who have made a false profession of Christianity) will be taken by the angels. Those taken will be cast directly into the lake of fire. The Lord was marked out as the One who would baptize with fire (Matt. 3:11). This is what Christ as the "Son of man sitting on the cloud" will do with the Christian testimony at the harvest judgment. The harvest judgment will take place between the appearing of Christ and 1290 days measured from the middle of Daniel’s seventieth week. It will only involve the prophetic earth (Israel and Europe). If it was the entire world then Gog and Magog wouldn’t be able to come down against them after the harvest. 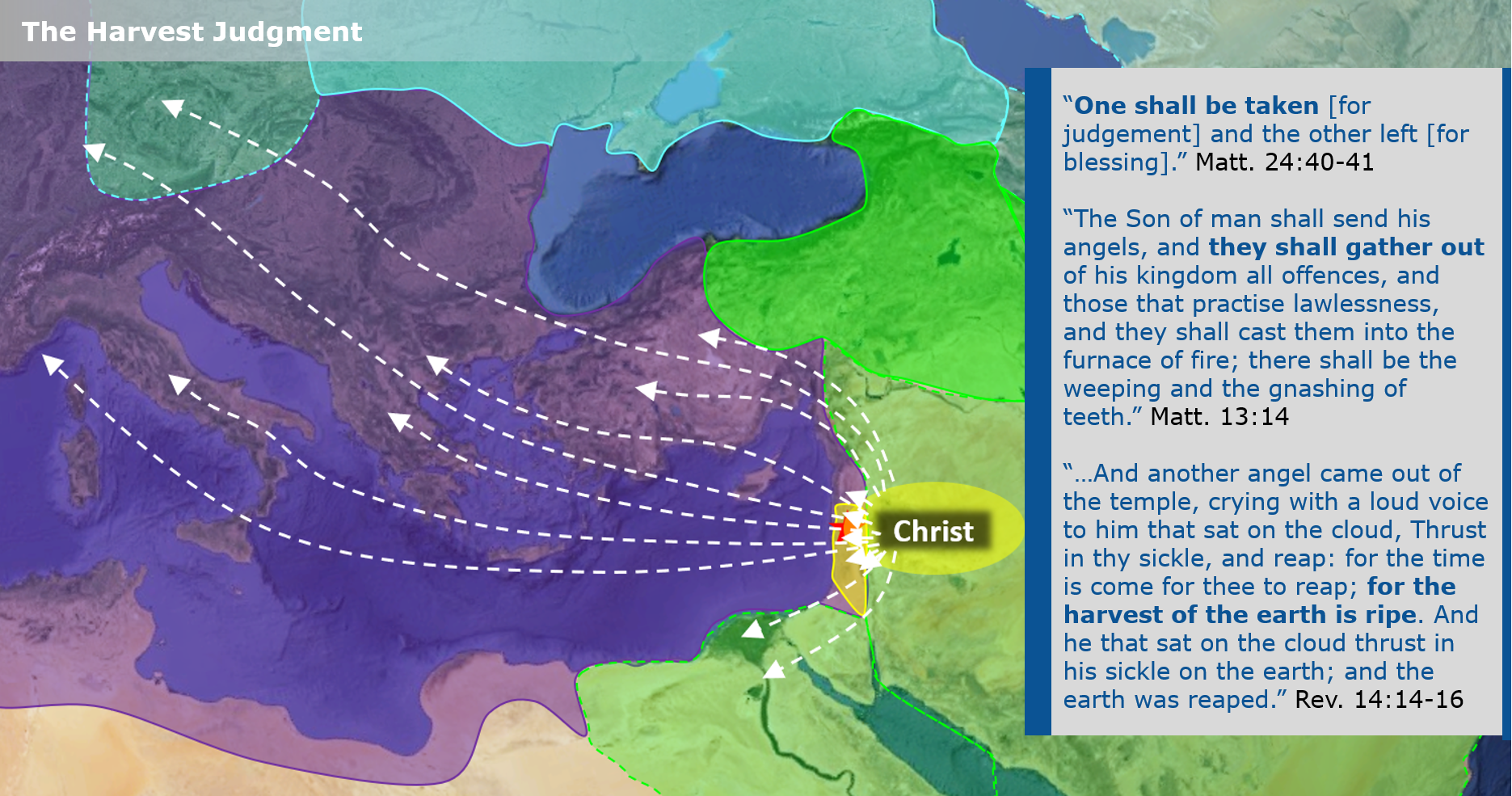 The Harvest & Vintage are "the judgment of the quick" (Acts 10:42; 2 Tim. 4:1; 1 Peter 4:5) or living, which is when the Lord will deal with the living persons on earth, at the START of the Millennium. The judgment of the quick also includes the sessional judgment (Matt. 25:31-46). It is in contrast to the "judgment of the dead" which occurs at the END of the Millennium (Rev. 20: 11-15), when those who have died without faith will be raised to stand before the great white throne, and then be cast into the lake of fire (read more...). Two great differences between the harvest and vintage are: (1) the harvest is discriminating while the vintage is indiscriminate, and (2) the harvest immediately follows the appearing while the vintage takes place after Israel is restored in their land.