Related: The Assembly; The Body of Christ; The Bride of Christ; Office

The House of God. The term ‘House of God’ basically means the "dwelling-place" of God. In a greater sense, the universe is the house of God (Heb. 3:4; Acts 7:48-50; Isa. 66:1). But on earth, God had a physical house in the Old Testament, and He has a spiritual house in the New Testament where He does "in very deed dwell with men on the earth" (2 Chron. 6:18). In the Old Testament, the house of God was first the Tabernacle, then the Temple. When Israel rejected their Messiah, the presence of Jehovah departed from that Temple, and has not returned. That house is "desolate" to this day (Matt. 23:38). In the Millennium, a new Temple will be built, and the glory cloud will return; once again, the presence of God will be on earth in a physical temple (Ezek. 43:4-7). Today there is no physical house, but instead God dwells on earth in His heavenly people, the Church; "the house of God, which is the church of the living God" (1 Tim. 3:15). The house is composed of individual believers ("living stones"; 1 Pet. 2:7) who are built up together into a "spiritual house". God actually indwells the House, "through the Spirit" (Eph. 2:22). The House of God is a figure of the Church that carries the thoughts of internal order, conduct suited to the character of God, and testimony before this world.

Various Aspects of the House. As the House (or, Building) of God, the saints are responsible to conduct themselves in behavior and doctrine that is according to the mind and character of God. A man’s house reflects on what sort of man he is. In the same way, the House of God ought to reflect the character of God, as a witness and support of the truth (1 Tim. 3:15). Are we rendering a testimony worthy of God? The House of God is taken up in many different ways in scripture. Sometimes it is looked at as something God is building in His perfect sovereignty gradually over time, and it is not yet complete but will be complete one day. Other times it is looked at as something man is responsible to build (thus failure comes in) and it is complete at any given time. Then again, sometimes the House of God is viewed as the universal assembly, the entire public testimony. Other times, the House of God is viewed in its local aspect, as a gathering of believers to the name of our Lord Jesus Christ. The context of each occurrence determines which aspect is being referred to. 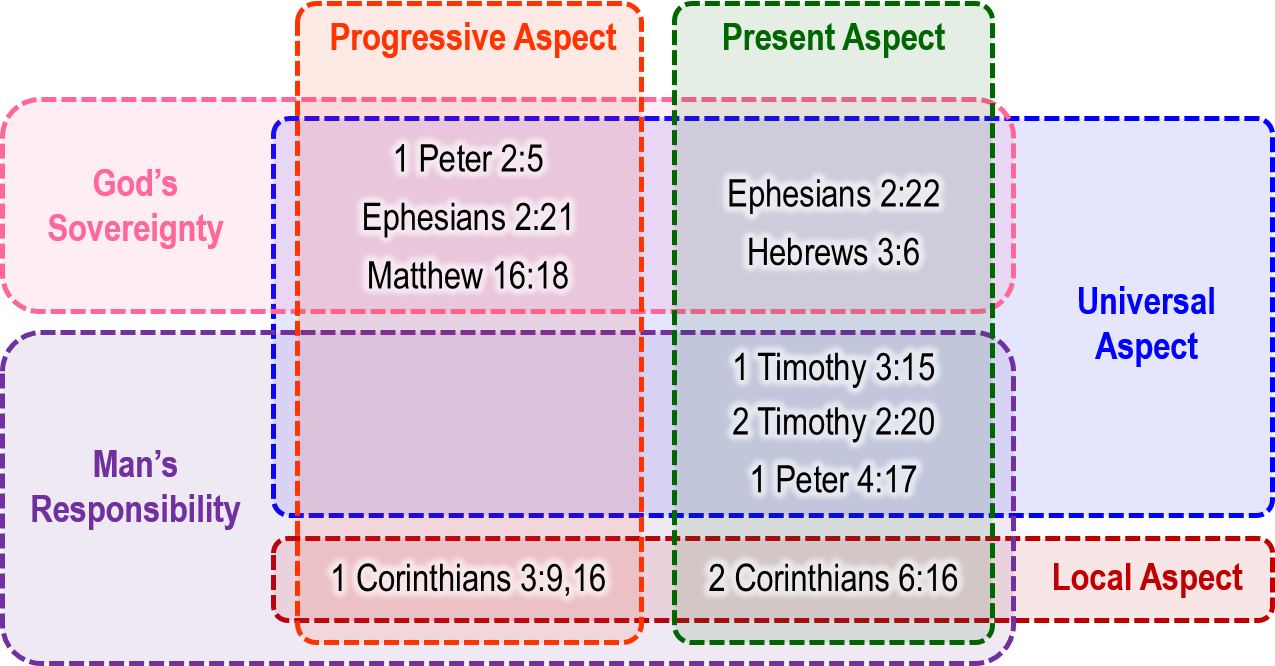 The Order of a House. The term “House” is divinely fitting for at least two reasons that come to mind. When you look at a house, you see chiefly two things: (1) the external physical framework and appearance, and (2) the internal social framework called a “household”. Both of these thoughts contribute to the testimony of the house. In any estate, these two components are requisite for honor in the community. On one hand, I may have a well-behaved, well-mannered household, yet if my property is in disrepair, dishonor is upon me. On the other hand, the physical appearance of my home may be pristine, yet if scandal plagues my household, dishonor is upon me. Order in the house and household is important to accurately reflect the character of the head of the household. So it is with the house of God.

The Pattern of the House. The rules and guidelines for God’s House are outlined in His Word. There was a pattern for the physical House of God in Moses’ day (Exodus 25:9), in David and Solomon’s day (1 Chron. 28:12), and there will be for the temple in a millennial day (Ezek. 43:10). What about today? Yes, there is a pattern for God's house today. We have this pattern in the epistles of 1 Corinthians, and 1 Timothy. The first takes up the order of the local assembly, and the second deals with the behavior of believers in the house of God at large. The pattern of God's House is implemented through His administration. The leading feature of the house of God is holiness. "This is the law of the house; Upon the top of the mountain the whole limit thereof round about shall be most holy. Behold, this is the law of the house" (Ezek. 43:12). “Holiness becometh thine house O Lord forever” (Psa. 93:5). We do well to remember this as those who are in God's house today.

The Administration of the House. The administration in God’s House flows from God, by the authority of Christ through the oversight in a local assembly to you and me. Rebelliousness in the House, whether against God’s Word or against assembly oversight, will result in discipline. When the house of God is in order, it is a display of the wisdom of God to this world; however, when it is in disorder it renders an equal and opposite testimony to His character and His Name. If the local administration fails to discipline an unruly member, it yields a poor reflection on God. Disciplinary measures may include a reduction of privileges in the house of God. After a brother or sister has been disciplined and comes to repentance, they are restored to full privileges in the assembly. But if all discipline fails, the brother or sister is faced with a decision: “Either submit to the discipline, or be removed from the household.” If someone who professes Christ manifests themselves to be a wicked person, the assembly is responsible to put that wicked person out (1 Cor. 5); this is called excommunication. When an individual is removed from the assembly via excommunication, they relinquish all privileges that they once had as a part of the House. The fellowship of the household should be interrupted. If repentance is worked, that brother or sister may return, and if they return, they must submit themselves to the discipline and administration of the House of God once again. This is why excommunication is really not assembly discipline, properly speaking. A father would not discipline his child by removing him from the household. To remove a child from the house is the very last resort. Nonetheless, excommunication is discipline in the greater government of God. The assembly is identified with Christ in a public way as the house of God, and as such evil must be dealt with (1 Cor. 5:12).